With its simple, straightforward words by Doreen Rappaport and large, fascinating pictures by Bryan Collier, Martin’s Big Words serves as a great introduction to Dr. Martin Luther King, Jr. and the Civil Rights Movement. The biography begins with Dr. King’s childhood but quickly progresses to his efforts for change. Young readers will learn about major events of the Civil Rights Movement, from Rosa Park’s refusal which led to the Montgomery Bus Boycott to Dr. King’s assassination in Memphis in 1968, which is dealt with very delicately.

Martin’s Big Words earned the Caldecott Honor achievement in 2002. Rappaport’s website includes a learning guide for this and other stories. A video version of the book also exists. Narrated by actor Michael Clarke Duncan and featuring sound clips of Dr. King’s “I Have a Dream” speech, the video provides another good way for readers to meet Dr. King.

My Name Is Yoon

This past week in Resources for Children class was devoted to multicultural books. In My Name Is Yoon, Helen Recorvits introduces readers to a young Korean girl who recently moved to the United States with her parents. I really enjoyed this cute story about fitting in to a new culture. Yoon does not enjoy American school at first and prefers to write her name in Korean, not English. Ultimately, she opens up to being in a new place and learning a new culture.

Yoon is also the main character in another book by Recorvits: Yoon and the Christmas Mitten. This is another story about how Yoon deals with fitting in. Both Yoon books are nice ways to introduce young readers to another culture without immersing them too much and losing them.

This multi-honored book by Laura Vaccaro Seeger teaches children about how things develop — first a seed then a flower, a caterpillar then a butterfly, painting then a picture. With its simple pictures and colors, First the Egg is perfect for young children. The book also features a clever cut-out design that will have both kids and adults turning the pages back and forth.

First the Egg is a 2008 Caldecott Honor and Theodor Seuss Geisel Honor Book. The entire book can be previewed online courtesy of Lookybook. Click here to preview.

William Low’s Old Penn Station is beautifully illustrated. The story presents the history of the station as if it were telling the life of a living, breathing person. The realistic, detailed paintings further bring the station to life. Old Penn Station romanticizes the older way of life, when trains were the primary means of transportation and grand stations were filled with travelers. It’s hard to miss the message of losing the past and “you don’t know what you’ve got ’til it’s gone.” The book feels more like a coffee-table book than a children’s book, but older kids who enjoy trains, art, or history might appreciate it.

I love books that give readers more than just a story. The pictures in Mélanie Watt’s Scaredy Squirrel are just as important as the text and bring a sense of interaction with readers. There are images of things Scaredy Squirrel is afraid of, a breakdown of his daily schedule, and a detailed chart of the exact locations he has visited in his tree. In his first adventure, Scaredy Squirrel explains that he is afraid of, well, pretty much everything. He never leaves his tree because of the danger that exists outside of it. However, one day his life changes when he falls out of his tree and discovers he is a flying squirrel. Now his daily schedule is different…slightly.

Since its publication in 2003, Don’t Let the Pigeon Drive the Bus! has been included on many “Best Books” lists and has received several awards, honors, and prizes, including receiving a Caldecott Honor in 2004. The book is a very simple in concept, pictures, and narrative. The story begins when a bus driver takes a break, telling the reader, “Don’t let the pigeon drive the bus!” For the rest of the story until the bus driver returns, the reader is in charge of preventing the pigeon from driving away. The book lends itself well to storytimes since kids will love to yell “No!” when the pigeon repeatedly asks if he can drive the bus. Parents will enjoy the similarity between the pigeon’s promises, pleads, and ultimate temper tantrum and situations they’ve gone through with their own child.

Once children have experienced the adventure with the bus, they can also enjoy other pigeon stories: Don’t Let the Pigeon Stay Up Late!, The Pigeon Finds a Hot Dog!, The Pigeon Has Feelings, Too!, The Pigeon Loves Things That Go!

Of the 25 children’s books I read for Resources for Children this week, The Arrival by Shaun Tan was my favorite. As soon as I figure out where Barnes and Noble shelves it, I’ll own a copy. The Arrival is a wordless graphic novel; the story of a father and husband traveling to a foreign place to make a better life for his family is told through beautiful sepia pencil drawings. Tan alternates between large drawings and series of smaller “film strip”-like images to capture the feeling of alienation, confusion, and longing.

Although The Arrival is essentially a picture book, the concept and subtle detail of the drawings may be best for slightly older ages. Since its publication in 2007, it has already received numerous honors, including New York Times Best Illustrated Book of 2007, Horn Book Fanfare Book of 2007, and ALA’s Notable Children’s Book of 2008. 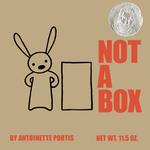 When I was younger, my sisters and cousins and I made a house out of a refrigerator box. I’m sure you or your kids enjoyed playing with boxes too, much like the rabbit in Not a Box by Antoinette Portis. The box that the rabbit plays with is not a box; it is a rocket ship, a race car, a mountain. With the simple line illustrations, children will be able to distinguish between what the adult sees – the rabbit and box drawn in black – and what the rabbit imagines – the created world drawn in red. The design of the book also cleverly reinforces the concept of cardboard.

Since being published in 2006, Not a Box has been distinguished as an ALA Notable Children’s Book and Theodor Seuss Geisel Honor Book. Portis currently has a sequel to Not a Box called Not a Stick. 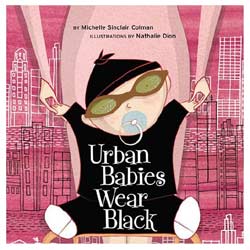 Ever wonder what an urban baby does all day? In this board book by Michelle Sinclair Colman, readers will find out urban babies’ lifestyles do not differ much from their parents’. With its fun colors and simple, repetitive language, kids will enjoy this book almost as much as their parents. Each page of Urban Babies Wear Black presents another ridiculous, yet amusing, activity that an urban baby enjoys, such as doing yoga or drinking lattes. Though the concept will be lost on the youngsters, adults (who are essentially the targeted audience since they buy the books for kids) will love the humor.

If you enjoy this one, Colman has others for others audiences that are surely not to miss: Beach Babies Wear Shades, Country Babies Wear Plaid, Winter Babies Wear Layers, Eco Babies Wear Green.

In Book 1 of his “His Dark Materials” series, The Golden Compass, Philip Pullman creates an adventurous fantasy with a strong female main character in young Lyra. Despite the appearances of talking animals and the young ages of the characters, this book is not ideal for young readers. At times, the violence seems graphic, though it is probably nothing worse than readers view on television.

In The Golden Compass, Lyra joins many adults who head North to rescue kidnapped children. Along the way, she learns the truth about various aspects of their universe and about her own history. The book and the movie based on this book have been very controversial lately, but I did not see how this book could have created such controversy.