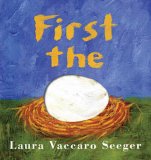 This multi-honored book by Laura Vaccaro Seeger teaches children about how things develop — first a seed then a flower, a caterpillar then a butterfly, painting then a picture. With its simple pictures and colors, First the Egg is perfect for young children. The book also features a clever cut-out design that will have both kids and adults turning the pages back and forth.

First the Egg is a 2008 Caldecott Honor and Theodor Seuss Geisel Honor Book. The entire book can be previewed online courtesy of Lookybook. Click here to preview.

Since its publication in 2003, Don’t Let the Pigeon Drive the Bus! has been included on many “Best Books” lists and has received several awards, honors, and prizes, including receiving a Caldecott Honor in 2004. The book is a very simple in concept, pictures, and narrative. The story begins when a bus driver takes a break, telling the reader, “Don’t let the pigeon drive the bus!” For the rest of the story until the bus driver returns, the reader is in charge of preventing the pigeon from driving away. The book lends itself well to storytimes since kids will love to yell “No!” when the pigeon repeatedly asks if he can drive the bus. Parents will enjoy the similarity between the pigeon’s promises, pleads, and ultimate temper tantrum and situations they’ve gone through with their own child.

Once children have experienced the adventure with the bus, they can also enjoy other pigeon stories: Don’t Let the Pigeon Stay Up Late!, The Pigeon Finds a Hot Dog!, The Pigeon Has Feelings, Too!, The Pigeon Loves Things That Go!

When I was younger, my sisters and cousins and I made a house out of a refrigerator box. I’m sure you or your kids enjoyed playing with boxes too, much like the rabbit in Not a Box by Antoinette Portis. The box that the rabbit plays with is not a box; it is a rocket ship, a race car, a mountain. With the simple line illustrations, children will be able to distinguish between what the adult sees – the rabbit and box drawn in black – and what the rabbit imagines – the created world drawn in red. The design of the book also cleverly reinforces the concept of cardboard.

Since being published in 2006, Not a Box has been distinguished as an ALA Notable Children’s Book and Theodor Seuss Geisel Honor Book. Portis currently has a sequel to Not a Box called Not a Stick.